Saturday we woke up to a very cold morning.  You know those mornings when you really don’t want to climb out from under what little warmth you have found in the tent through the night?  Sadly someone has to get up to start the fire (the mister of course).

Our seven year old was the first one out of the tent and he decided he would whittle while waiting for his hot cocoa to get ready.

You can tell by the look on his face that he wasn’t completely loving the cold weather which isn’t like him at all. He would rather be outdoors camping any day than inside.

Shortly after Davis started enjoying his hot cocoa and really warming up by the fire, little Thing 2 came out all smiles and ready to start the day.

Once everyone ate breakfast we started getting the camp site packed up in order to start our bike ride.  For anyone looking for a place to camp, the Cades Cove Campground was a great place to stay!  We snapped one last picture of the camp site before heading off on our bike ride.

I was a little nervous since Davis would be on his own bike and the amount of traffic through there is crazy!  Anyone that’s familiar with the mountains of Western NC where we live or the area that Cades Cove is located, knows that we have very little flat ground in our area.  Sure, Davis had been practicing on hills since that is his weakness but being only seven he still has a way to go when it comes to really being able to pull the hills.  The other struggle he has is it’s hard for him to change the gears on his bike.

He did absolutely fantastic and I am so proud of him!  He pushed through a lot of the hills, but I did walk some with him and that’s alright.  He gave it his all, 100% and is already asking if we are going to go back next year.

He had his first real wreck on the ride which happened around 8 miles in or so. He skid across the pavement and scraped up his hands and knees and ripped his biking pants. He was a little upset that his bike got a few scrapes and scratches but we assured him that those simply mean that he is now a real cyclist.
This was the longest ride he has done to date and the first one where he biked in that kind of traffic.
I’m sure we will do again with them at some point, but maybe time if for the time of year that the loop is closed to motor vehicles from 7am-10am and get a head start on the traffic.

After the 11-mile ride, we took the boys back to the picnic area for a tasty lunch before heading back home over the mountain.  They had an awesome time which in the end is all that really matters!! 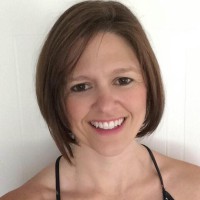